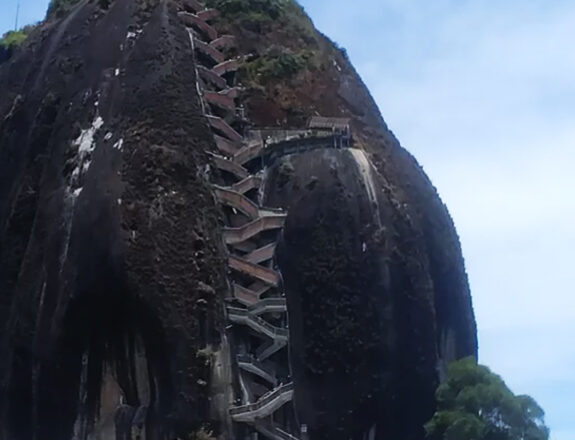 A rock with a view…

(Based on a true story, and peppered with some imagination)

When Luis Eduardo Villegas Lopez’s father divided his land between his sons and daughters, it was clear that someone is going to get the damn rock, but somehow Luis didn’t think he is that unlucky to be the one. Now, ten years later, Luis had this rock taking a good part of his inheritance, like a big Billboard that says: ”Here lives Luis, the unluckiest person on the planet”.

Well, you can call it a rock, but it was 200 meters high, very wide and took two thirds of his land. Luis was trying to make a living for his growing family, but that was not easy considering what was left of the land to cultivate with potatoes, tomatoes, onions and what have you. Every morning when Luis woke up and stretched himself, the rock was there, proud and huge, taking the land he needed so much.

Then one day Luis decided to climb the rock to see how it looks from above. It was not trivial as the rock was very steep and Luis had to risk himself going up, sweating all the way to the top. Nevertheless, swearing along, Luis made his way to the top. When he got there, tired from climbing, he looked around and was impressed with the view. In addition, while it was very hot and humid down in the valley, here at the top, there was some wind.

The week after, he repeated the same way with some good friends that agreed to make the effort. They were also impressed seeing the view and ambience at the top. “Maybe I can carve a more comfortable way to go up, and people will come here to climb and enjoy the view”, said Luis. And so he did. It took time, effort and money, but Luis was not a lazy person. Surprisingly, people started coming to climb the rock and enjoy being at the top of the rock. In fact, many people started to come, so Luis started charging some entrance ticket and opened a small kiosk on the top.

Five years later, the government decided on a very drastic plan that converted the whole area to something else. In order to generate electricity, the decision was to flood the whole area and create an artificial lake. Many people’s lands were taken, replaced with lands elsewhere, whether they like it or not. One village was relocated altogether. For Luis it was a different story. Now his rock was situated in the middle of a beautiful lake. Prices went up to climb the rock. People came all around the world to see the magnificent view. Thousands of people came up daily and spent lots of money at the top of the rock on food and drinks. Many people paid Luis for opening merchandise and food stores at the bottom of the rock. Two towns are arguing for years to which town the rock belongs.

Dozens of years passed since then. Luis is not alive anymore. His descendants are enjoying the income from the damn rock. At the bottom of the rock there is a statue of Luis, and a plaque saying: ”Here lived Luis, the luckiest person on the planet!”.

While the story is not precise, it is based on a real rock and a real story. The rock has two names, according to the two towns claiming for it: “The Stone of El Peñol”, and “The Rock of Guatapé”. It is in Antioquia, Columbia.

I visited the rock, this summer when I took my long overdue “Post Army Trip” (only 3 decades delayed trip). When I heard this story while sitting in the cafe on top, I reflected on some of my own rocks in life. Situations that seemed unlucky when they first happened to me, but through curiosity, persistence and creativity I was able to turn around.

In the last couple of years, I provide business and personal growth mentoring service for small to medium company’s leaders, leveraging my experience, studies and personality. Founders, CEOs and management teams come to me to define better the ‘damn rocks’ in their territory that are obstacles today, and I facilitate finding the way to transform the situation to generate extraordinary results. The key is changing our view about the rock by asking ourselves questions like:

What’s good in having this rock?
What can I achieve with it that I cannot without it?
What other angles can I look at this rock?

Looking forward to working with you.